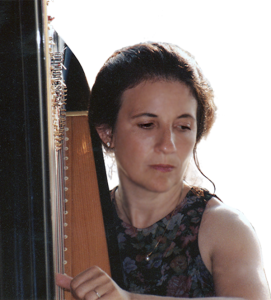 Nationally noted harpist Carrie Kourkoumelis began her career in Seattle, where she won the coveted Battelle Prize at seventeen, which included a debut recital for the Seattle critic’s circle. She has appeared as a soloist, chamber musician, and held principal harp positions all over the United States and in Greece. She studied at The Curtis Institute of Music, the University of Washington, the Music Academy of the West, and the Tanglewood Music Center with Lynne Wainwright Palmer, Pamela Vokolek, Marilyn Costello, Bernard Zighera, and Suzanne Balderston. She is grateful for her excellent solo and chamber music coaching with many renowned musicians, including Rafael Druian, Eugene Lehner, Gunther Schuller, Gabor Rejto, Leonard Altman, and members of the original Philadelphia String Quartet.

After being awarded a Leonard Bernstein Fellowship at Tanglewood, she moved to Boston from Los Angeles where she had been a free-lance harpist in the movie studios (including Warner Brothers Studios), principal harpist of the Ventura Symphony, and held other principal harp positions in Massachusetts, Washington, Montana, California, and Alaska. In New England, she has been a soloist with such diverse groups as the Boston Cecilia Society, Master Singers and Alea III, and worked with the Boston Lyric Opera, Boston Ballet Orchestra, Pro Arte Chamber Orchestra, New Hampshire Symphony, Monadnock Music Festival, Springfield Symphony, and in Boston theater orchestras for many Broadway theater productions such as South Pacific, Beauty and the Beast, Phantom of the Opera, and Carousel. She has premiered many new works and played under the baton of Leonard Bernstein, Maurice Abravanel, and Gunther Schuller. She has appeared in concert with Leonard Rose, Eileen Farrell, D’Anna Fortunato, Jane Bryden, Sanford Sylvan, Joe Lovano, Ray Charles, Chet Atkins, Liza Minnelli, Dudley Moore, Brian Wilson, Connie Francis, and Ben Vereen. She was a founding member of the Music at Angel Fire Festival in New Mexico, with former Juilliard String Quartet First Violinist Joel Smirnoff, The Raphael Trio, (Cantor/Soprano) Betsey Peters, harpsichordist Elaine Comparone, oboist Burt Lucarelli, guitarist Dusan Bogdanovic.

As a solo recitalist and chamber musician, she has performed at Carnegie Hall, the Kennedy Center, Sanders Theater, the Gardner Museum, the American Academy of Arts and Sciences, Harvard University, and the J. Paul Getty Museum. She has played as a soloist for Supreme Court Justices, given lecture demonstrations in inner-city housing projects, and watched her harp airlifted into an open-air Venetian fort on the isle of Crete. Having won numerous awards, Carrie Kourkoumelis is called upon to judge national harp competitions and present workshops, including the American Harp Society National Competition and the Anne Adams Auditions. She presented a national workshop at USC with The Producers Music Director Don York on playing the harp for Broadway theater productions.

Ms. Kourkoumelis is a twice-elected member of the Melrose School Committee, President of the American Harp Society Foundation, Co-Director of the Anne Adams Competition. She served as a a member of the Executive Committee of the Board of Directors for the American Harp Society including the chairperson for its first-ever sold-out AHS National Conference at Brandeis University with 750 harpists from all over the world, on the Massachusetts NOW Foundation Board and with numerous local organizations. She was Chairman of the City of Malden Cultural Council and the city’s 350th Birthday Celebration mayoral appointee in charge of its Arts presentations. She works now in collaboration with various arts and civic foundations to bring music to those who cannot make it to the concert hall. Her entire family shared the same stage for the inaugural Healing Arts Program at Massachusetts General Hospital. Ms. Kourkoumelis has received major grants from the Massachusetts Cultural Council for several concert series featuring the harp and chamber music that pioneered new modes of community outreach. A former adjunct faculty member at New England Conservatory Prep School, Mt. Holyoke, Smith Colleges, and the University of Montana, Carrie is presently the Director of The Classic Harps of New England and teaches primarily in her Melrose studio. Carrie and her husband Campbell Kaynor are grateful to be the parents of four, Arthur Diogenes, John Elias, Nickolas Edward and Efthalia Fay Kaynor, and their two standard poodles, Wellington and Danté.

This is the website of The Classic Harps of New England, www.manystrings6.com/harp/.
Our business address is 28 Cargill Street, Melrose, MA 02176 USA.

Other than anonymized counts, no personal data is collected from any visitors to our site.

Comments: If a visitor leave comments on the site, we collect only the data shown in the comments form and also the visitor’s IP address and browser user agent string to help spam detection. An anonymized string created from your email address (also called a hash) may be provided to the Gravatar service to see if you are using it. The Gravatar service privacy policy is available here: https://automattic.com/privacy/. After approval of your comment, your Gravatar profile picture is visible to the public in the context of your comment.

Media: No images can be uploaded to the website.

Contact Forms: We keep contact form submissions but do not use the information submitted through them for any other purposes.

How Long We Retain Your Data: We keep contact form entries and analytics records for a year. If you leave a comment, the comment and its metadata are retained indefinitely so we can recognize and approve any follow-up comments automatically instead of holding them in a moderation queue.

What Rights You Have Over Your Data: If you have filled out a contact form on this site or have left comments, you can request to receive an exported file of the personal data we hold about you, including any data you have provided to us. You can also request that we erase any personal data we hold about you. This does not include any data we are obliged to keep for administrative, legal, or security purposes.

Where We Send Your Data: Visitor comments may be checked through an automated spam detection service. Otherwise no data is shared with anyone.

The Classic Harps of New England